Union Minister of Road Transport and Highways, Nitin Gadkari, has put the Motor Vehicles (Amendment) Bill up for consideration at the Lok Sabha. Primarily, the legislation comes with fresh amendments that can slap reckless drivers with a hefty monetary cost plus suspension or impounding of licence. The Bill is being hailed as a landmark in establishing strict vigilance on unruly traffic in the country and streamlining transport.

Read on to know the main features for the Bill. 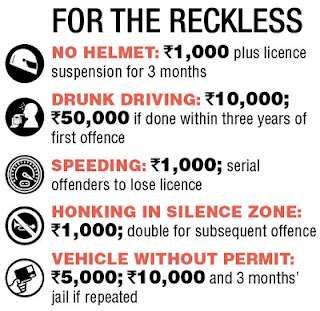 1. Checking reckless driving
The primary highlight of the Motor Vehicles (Amendment) Bill is to address the issue of reckless driving in the country. The legislature seeks to correct this by introducing stricter fines as a preventive measure against reckless driving, drunk driving, etc.
Fancy this: drinking and driving will attract a fine of Rs 10,000 for first offence and if you venture to commit it again within three years of first offence it will attract a penalty of Rs 50,000. You can be fined Rs 5,000 for racing on the road for first offence and Rs 10,000 for second. Parking on public road causing impediment to traffic can make you pay Rs 500 per hour plus removal charges. Using mobile phones while driving will attract fine of Rs 5,000.
2. Measures against cases of irresponsible driving by juveniles
Additionally, in cases of traffic violations by juveniles, the guardian/owner of the car will be held responsible, unless they can prove the offence was committed without their knowledge or they tried to prevent it. The juvenile will be tried under the Juvenile Justice Act. The registration of the vehicle involved will stand cancelled. In case of surrender of licence because of any violation, the driver will not be authorised until he/she gets back the licence.
As a wider measure to check irresponsibility among citizens, and to instill humanitarian gestures, the Bill also penalises a vehicle for not giving way to emergency services like the ambulence. Most of the fines have been hiked almost ten times.
3. New rules in issuing Driving Licence
To keep the drivers under tight leash and not to escape the law, the bill proposes a National Register of Driving Licences under the central government. This national register will subsume all States Registers of Driving Licences and will see that no driving licence issued or renewed under the Act shall be valid unless it has been issued a unique driving licence number under the National Register of Driving Licences. The amendment makes the use of Aadhaar number mandatory for applying for driving licence and vehicle registrations….Read more>>
Source:-techiyogiz
Share:

You can get instant e-PAN. Here is how

Will you have to file Income Tax Returns if you earn less than Rs 5 lakh?

NEFT, RTGS Fund Transfer To Become Free: This Is How You Will Benefit

B. V. RAMANAIAH - Become IRCTC Agent, Earn Rs 80,000/Month: This Is How It Works (You Can Book Unlimited Train Tickets)

Sagar varukolu - Become IRCTC Agent, Earn Rs 80,000/Month: This Is How It Works (You Can Book Unlimited Train Tickets)

varukolusagar - Become IRCTC Agent, Earn Rs 80,000/Month: This Is How It Works (You Can Book Unlimited Train Tickets)

SAHEBRAO RAMTEKE - Become IRCTC Agent, Earn Rs 80,000/Month: This Is How It Works (You Can Book Unlimited Train Tickets)

can I operate it from home ?

vinay prasad - Become IRCTC Agent, Earn Rs 80,000/Month: This Is How It Works (You Can Book Unlimited Train Tickets)

You can get instant e-PAN. Here is how

Will you have to file Income Tax Returns if you earn less than Rs 5 lakh?

Closing your bank account? Do these 4 things on priority